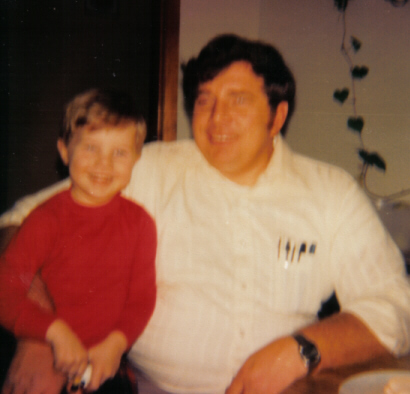 This time of year, while most everyone in my country is somehow celebrating independence, I think a lot about My Father, Eddie. I think about what his life was like, losing his right eye to a firework at 14 years old. I grew up with a Dad who wasn’t afraid of them, despite it. There was a respect for them, he taught us – just like he did with firearms. He would spend SO much money on them (fireworks and firearms). Bigger, Better, More than the year before – just like with Christmas lights – that was Eddie Dean Brandon’s life philosophy.

Dad mowed the lawn as a kid, which apparently was quite the entertaining event to behold and participate in. America in the 1950’s was about as exciting and interesting as an unsalted soda cracker, if this was the standard for a Saturday afternoon. Dad was push-mowing one of those old rotary-wheel-blade-style mowers. One of the neighbour boys wanted in on that action and offered young Eddie a trade. For letting this young man have the privilege to mow this yard for my Dad, young Eddie the blossoming salesman, the young man would give my dad a firecracker. Eddie did what Eddie was wont to do – he searched for something to blow up. With his prize in hand, young Eddie settled on a small glass Alka-Seltzer bottle from the garage. When lit, and dropped inside, it exploded faster than he’d expected and when it did, it blew shards of glass into young Eddie’s right eye, blinding him on that side, forever. 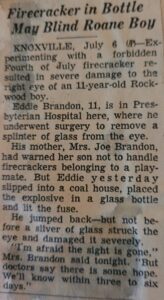 Unable to join the military, disqualified from contact sports, and undoubtedly mocked, ridiculed, ostracized to some degree – Dad had a tough row to hoe those later years, where many of a young man’s attitudes on society and relationships form. My father likely struggled with self-image and masculinity issues due to that event. His gruff, overcompensating demeanor and love of John Wayne, Clint Eastwood, Rambo, and Porky’s stemmed from.
Imagine kids in the 50’s and how terrible they could be. None of the awareness and sensitivities of today’s generation (which still isn’t saying much). Could you imagine girls wanting to date the boy with the droopy eye or the glass eye that never seemed to look right at you? Think of the things people said behind his back and even to his face. How might that have hardened my Dad. No wonder I was always told to suck it up. I’d never suffer in life the way Eddie did. How could any struggle I had have ever measured up to the one he couldn’t even fully realize himself?
We talked about it, that eye. We didn’t talk much about the accident, his recovery, or the events that followed – many of which I would learn about going through my grandmother’s things following her death in 2014. We discussed many aspects of his challenges, but Daddy was always proud and didn’t necessarily embrace being the victim. Dad was a “Ok, God, what’s Next” more than a “Oh, God, Why Me”, kinda guy. It was more than likely this incident that forged that fortitude in my Father. Still, Dad didn’t lower his guard much to really dig deep into how it affected him. Maybe he wasn’t that deep of a thinker. Maybe he had just moved past it.
My Dad’s life was impacted by that accident – it altered his trajectory completely – but he never blamed Fireworks, it would seem. Not judging by the displays I experienced as a kid.
My grandparents, however, launched a statewide lobbying campaign to ban fireworks. True story. There were newspaper articles…it was pretty big news locally in the mid 50’s.
Imagine my Dad, the kid who lost his eye to a firework, and the son of the grumpy coots trying to take everyone’s fun away. Imagine what THAT did to him, socially. I have no idea, to be honest. Just pondering what made up my Dad’s personality.
Not that I feel I owe anyone an explanation of my trauma, but in full disclosure, it stems from an exploitive and toxic work experience I don’t talk a lot about. Years ago, I was caught up in a city fireworks display accident that could have gone much worse than it did. Still, as I was the one backstage trying to fire the cue so my radio station could time the soundtrack just right, one of the tubes tipped over, shot into one of the boxes where the fireworks were set to fire from and when it caught fire, fire began shooting off in every direction as more tubes got knocked over and display stands fell. It was an accident the crew was prepared for and recovered from with minimal impact on the finished product. However, when the blasts came and the fire started falling, there was screaming, scrambling, and we ran for cover. It was the closest thing to an actual Call-of-Duty firefight I’d experienced. While it didn’t turn out as tragic as it could have, it still messed me up a little if I’m being honest.
Personally, I don’t care for fireworks. I find them silly, as I do most things others go ga-ga over. I don’t like the intrusive noise pollution, for the same reasons I oppose motorcycles and loud cars. I don’t like the pollution and smoke, the debris and how it impacts our ecosystem. And, for someone who has PTSD when explosions happen, this time of year isn’t as pretty for me as the colourful lights in the sky are for me. I, empathically, feel the anxiety of others as well…even my 6 cats. For me, hearing explosions is a different kind of physio-psychological effect – one, I can handle playing a video game or watching a film or program – but hits much different when I do not want it and am not expecting it. Interesting how that works.
My Father and I didn’t see eye-to-eye on many things – how humans should be treated and talked about, right and wrong, fireworks and firearms. But that’s ok. I can accept him as he was. Dad didn’t see eye-to-eye with many people. While that sounds like a punchline from one of my old stand-up routines, it speaks more to the outspoken and opinionated nature of My Father, a trait I inherited whether any of us like it or not. Studying My Father through the lens of his trauma doesn’t excuse any of his abusive or atrocious behaviours, but it offers more of an explanation as to what might have led him down that path. Approaching his life through a sociological and psychological case study helps me accept him for who he was – Even if he couldn’t always accept me for who I was. Even, if we didn’t see eye-to-eye.

Thank you for your support! Dismiss