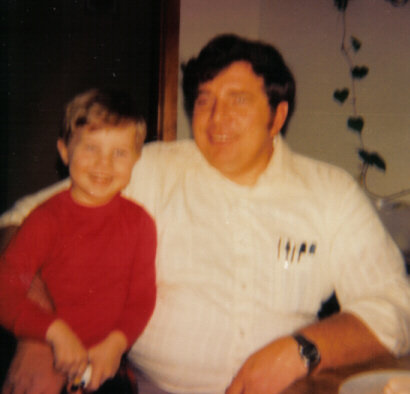 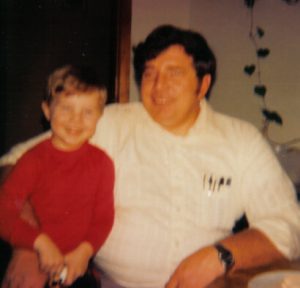 We are TAUGHT how to Love.  It’s a lesson learned.  Sure, some of it is instinct…we’re humans…we nurture…but for the most part…we aren’t given a handbook on how to love someone.  Well…The Bible…but for argument’s sake and the fact that everyone’s Faith is different, we’ll just stick with my original point.

It’s difficult to imagine our own little worlds where we might have been raised differently with parents who might have taught us inadvertantly a different WAY to love.  Imagine if your life would have been just a click different to the left.  How would you have turned out?

I had a difficult childhood.  I was thrust in the middle of my parent’s divorce and custody battle.  It wasnn’t pretty and it left battle scars that manifested later on when I attempted to have mature relationships with women.  You work through that.  But when it comes to loving a child…you’re TAUGHT that.

In the early 1970’s, My Father, Eddie Dean Brandon (pictured above circa 1980) met and fell in love with a woman who had come out of a rather abusive and negative marriage.  She was struggling to get by with two small children from that marriage…Robert and Melissa.  Now, in talking to My Father, I believe he always wanted children.  You see, Dad came from a different sort of background.  His Father, My Pa, was a kind and loving man.  One of the most generous individuals you could know.  The stories to this day I hear of my grandfather’s legacy amaze me.  Still, when it came home, I believe My Father felt like he was always vying for HIS Father’s approval.  Dad always felt some sort of inadequacy…whether it was real or perceived.  So, I think a lot of this, Dad reflected on his own opportunity to raise a child.

I can’t speak much to Eddie’s raising or the raising of my siblings…but I can speak to MY raising.

He wasn’t perfect…not to anybody but me.  But he was My Dad…and he taught me everything I know about Loving.

First…the Looks.  Whether it was a discerning look or a big gap toothed smile of approval…whether it was that cockeyed look of “what have you done that I have to cover for now?” or a tear filled smirk of satisfaction knowing he did SOMETHING right in this world…Dad had a look that was just pure gold.  His subtle cues were out of this world.  Something straight from television.

The Laugh.  My Father’s laugh was loud and boisterous…and inviting.  My Father had the kind of laugh that MADE people laugh along with Him.

A Storyteller Was He.  EVERYTHING I know about telling a story, I learned from Eddie.  Period.  My Mother has a wicked sense of humour and yes, though my previous career gave me lots of practice for it, it was My Father who taught me how to be funny.  Dad was absolutely hilarious…his inappropriate jokes…the timing…he was wasted in this small town.  Not only could he make you laugh…he could make you THINK.  He could make you FEEL.  Dad had a way of telling you the right story or anecdote at the perfect time.  It was just what you needed, it seemed.  My personality belongs to My Father.  His nose, his brow, his chin, whatever people want to point at and say “Oh, you’ve got your Daddy’s ______”…NOTHING makes me prouder than when they say “Oh, Dear God you are JUST like your Daddy” or “You’re your Daddy reincarnated”…because I know He lives still then.

The Affection.  Eddie was always one of THE most affectionate human beings I’d ever known.  For a big gruff southern man, you’d expect him to just grunt when you said “I Love You”…but Dad would wrap you up in this warm and comforting embrace…squeeze the dear life out of you…kiss you on the cheek and look into your eyes and tell you he loved you.  You see…when I had to make the decision to end his life…as difficult as it was…it wasn’t hard to do because we had unsaid feelings.  I knew where I stood…and he knew where he stood.  Always.  There was no questioning his love…because he showed it constantly.  Hugs and kisses and a literal pat on the back was nothing for Dad.  It was as natural to him as breathing.  That’s not to say that went both ways.  I was whooped as a child…belt-style…and Dad and I had a simple way of communicating in my teenage and early adult years…a swat to the back of the head.  However, even in THAT there was love.  To be hugged by My Father was powerful.  You felt loved.  I remember crawling up in his lap…even as a grown boy…wrapping my arms around him and kissing him on the cheek.  Yeah, by the time I was a teenager, it was kinda tongue-in-chic…but for us, we always goofed around together.  Dad taught me you didn’t have to always be so uptight about everything.

The Walls.  Dad got hurt.  Bad.  The end of his marriage meant for him the end of so much.  I just don’t think he ever wanted to go through that again.  The saddest thing about My Father’s life, I believe, is that He never gave it another shot.  He never took another chance.  He died alone.  Now, seeing that…I never wanted my marriage to end…especially the way it did and with all of the drama that has been surrounding me getting my girls.  Still, I hold out hope.  Dad, for whatever reason, never wanted to bring a woman into the mix that might put a wedge between OUR relationship.  It just wasn’t a risk he was willing to take.  I respect and admire Him for that sacrifice.  I think he was wrong…but I respect and appreciate the sentiment.  However, seeing Dad later in life…the loneliness after everyone had moved on…I think it just solidified for me that my heart would always have to be open.  I learned that Walls are there to protect us…but not to keep people out.  They are there to make sure that those that CAN get in deserve to be there.

The Savvy.  My Dad was a crafty old bastard.  For what he lacked in vision…he made up for in Vision.  The man had one eye…but saw more than most of us ever do.  He was absolutely brilliant.  One of THE smartest and most ingenious men I’ve ever known.  If I had an ounce of that, I’d be wealthy now.

So…really…what did I learn?  I grew up most of my life look at my Role Model…wanting to be like him.  I wanted a son, but never wanted to get married of have children.  I had different plans.  I was gonna travel the country and work on my career.  I was going to change the face of radio. 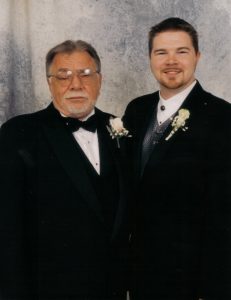 In the early 2000’s, Eddie’s son, Joseph Felix Brandon (pictured above, circa 2001) met and fell in love with a woman who had supposedly come out of a rather abusive and negative marriage.  She was struggling to get by with two small children from that marriage…Tori Mikala and Emily Alice.  Now, I never wanted children…until I met mine.  You see…I came from a different background.  I saw a lot of pain and suffering.  I saw a lot of hurt feelings and sadness.  But seeing those girls…and their mother…and knowing where I was in my own life…unstable and needing some sort of traction…I felt like I could belong and contribute.  I needed that.  They needed me.  And those girls were just amazing.  Emily, with her chubby cheeks and bouncy personality.  She was adorable.  Tori, a bit standoffish, but when she smiled at you or hugged you you knew you were special.  Once she got comfortable around me…the kid never shut up.  We bonded pretty quick, because I’m a big kid at heart.  Being their Dad was the greatest gift I’d ever had.  A few years later, my then wife decided it was time to have a baby between us.  I didn’t want to have a biological child…mostly because her DNA was tainted and my own family had their own issues.  I didn’t want to live my life looking at a child I brought into this world who might have Depression or worse yet, be like my ex’s paternal side.  So much is left to chance.  In the end, my ex got pregnant, much to my surprise and after accepting that, I decided the best way to counteract my fears was to raise this child the way I was raised.  With Love.

You learn how to love someone.

I lost My Father in 2007.  It was one of the most difficult experiences I will ever endure.  I was always ready to lose My Dad.  I was barely 15 and driving 100mph through Harriman at 3am trying to get Dad to a hospital when he was having a heart attack.  I was ready to say “goodbye” to My Dad 20 years ago.

You’re never ready to say “Goodbye” to your Best Friend.  And mine and Dad’s relationship transcended a boy and his daddy.  We were an inseparable pair.  Josh & Eddie…Eddie & Josh…soulmates, if you will.  I should only be so lucky to be blessed with that with My daughters.  Yes, the days of a son are over for me.  At 36, my breeding days are behind me.  But with the amaing young ladies I have…I hope to God and to Eddie that I get to be to them a fraction of what He was to me.

Father’s Day is always a bag of mixed emotions for me.  A day to celebrate BEING a Dad..but also a day to mourn again that I no longer HAVE a Dad.

I do hope, though…that through it all…I have that relationship with Tori, Emily and Mattie Belle.  I pray that they feel toward me the way I feel toward Eddie.  My only caveat…is that I hope they don’t rely on me quite the way I did Ed.  Dad was my foundation…and when I lost that…I was Lost.

Where do you turn when that person is gone?

You turn to God, I suppose.

So.  My Father met a woman with two children…married…had one of their own…divorced.

My Father had a successful career/business…lost it all fighting for his children.

My Father moved away for a few years…trying to make it…and ended up back in Rockwood…selling cars.

My Father died alone.  That’s where I believe these similiarities will cease. 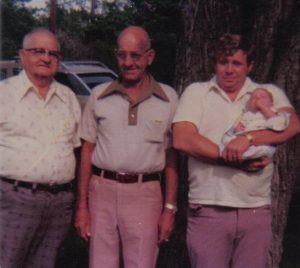 But on this, Father’s Day, I look back on Him.  I miss him.  Terribly.  Every second of every day.  I talk to Him and wait for an answer.  It doesn’t seem to come.